The conversion of the cut-to-length line No. 5 to a "Combiline" of the South African customer Hulamin was carried out completely by digital tools during the Corona pandemic. It went successfully into operation exactly on time and within budget. At Humalin, the remote rebuild realized by the GEORG specialists is now the "talk of the company".

Due to high capacity utilization at the Hulamin mill in Pietermaritzburg, South Africa, the management decided to convert the cut-to-length line 5, which Georg had commissioned in 1999, into a "Combiline" capable of either slitting or trimming and coiling strip.

It was planned to integrate a new recoiler with a pressure arm, support bearings and a coil lifting car for the removal of coils with outside diameters of up to 2,200 mm and up to 15 t weight.

Hulamin had placed the order with GEORG at the end of 2019. At that time, both partners could not have known that the rebuild would fall into the third wave of the Corona pandemic. By April 2020, the federal government had imposed a travel ban, and by December 2020, it was clear that the project would either have to be postponed indefinitely or the rebuild and commissioning would have to be completed without GEORG personnel on site.

Both partners jointly decided to implement the project to the greatest possible extent remotely from Georg’s headquarters in Kreuztal, Germany. The basis for the communication between the process control system of the upgraded line and the specialists at the Georg head office in Germany was and still is the Georg Connected Service platform.

Quick access to the machine control system and the plant components is assured by a dedicated online-support software. Data is exchanged exclusively via direct VPN connection, which has become a proven and reliable standard among an increasingly growing number of plant operators.

The project team used virtual reality to work directly on the plant: employees on site wore helmets with cameras mounted to them so that others could get an impression of the current situation even from a distance. Additional information was fed in via AR glasses, so employees in Germany had a "live" view of the plant in certain situations.

During the conversion phase, an extensive project meeting was held every week with Microsoft Teams®. Every day, there was an online meeting in a smaller circle to discuss the current activities, which was also attended by the external engineers from GEORG on site.

Consequently, the final acceptance tests went extremely smoothly. On April 30, 2021, precisely on the originally scheduled date, the project team handed over the multi-purpose line to Hulamin’s production team. Ever since that day Hulamin has been using the line on a three-shift basis - one shift per day as a cut-to-length machine and two shifts per day as a side-trimming and recoiling line.

The used digital tools have proved highly successful in the installation phase of the equipment and during the integration and connection of the electrical, hydraulic and process control systems.

Hulamin's management considers the project an outstanding success: the supposedly unachievable has been achieved. The successful rebuild was and is the "talk of the company". 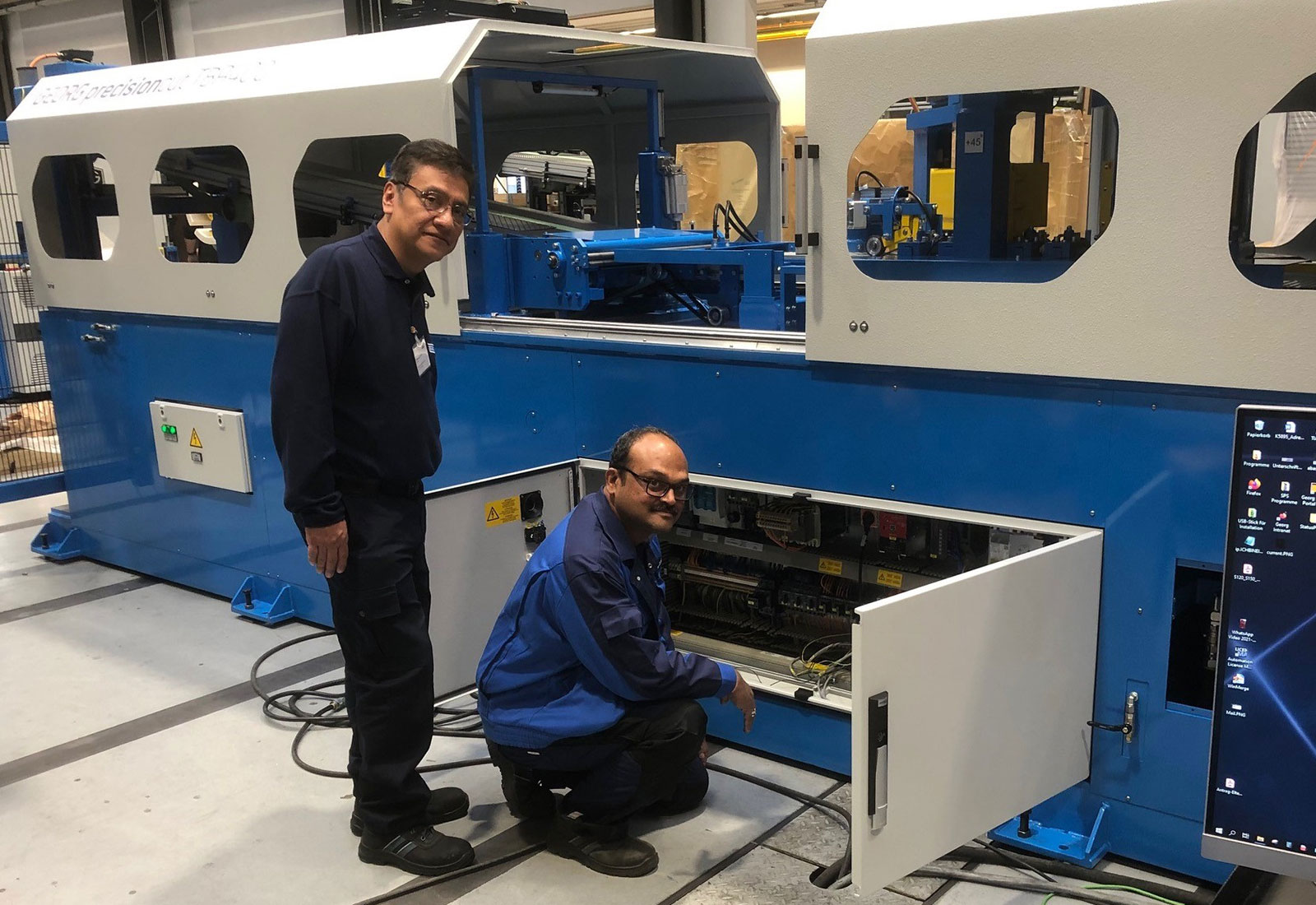 Always by your side

This week Alejandro from our Mexican service partner Maquitec and Mohan from GEORG in India started their training of several weeks at the Kreuztal headquarter in Germany. Alejandro will support our service team for North America, while Mohan and his Indian colleagues have been working for GEORG for more than 10 years.

Next GEORG ultragrind 10 is ready for delivery

Last year we reported on the investment decision of our long-time customer Decomecc NV from Genk/Belgium in a slitting line from GEORG, which was to be designed for the specific needs of the automotive industry. Now the Belgian company successfully announces the first strip cuts. 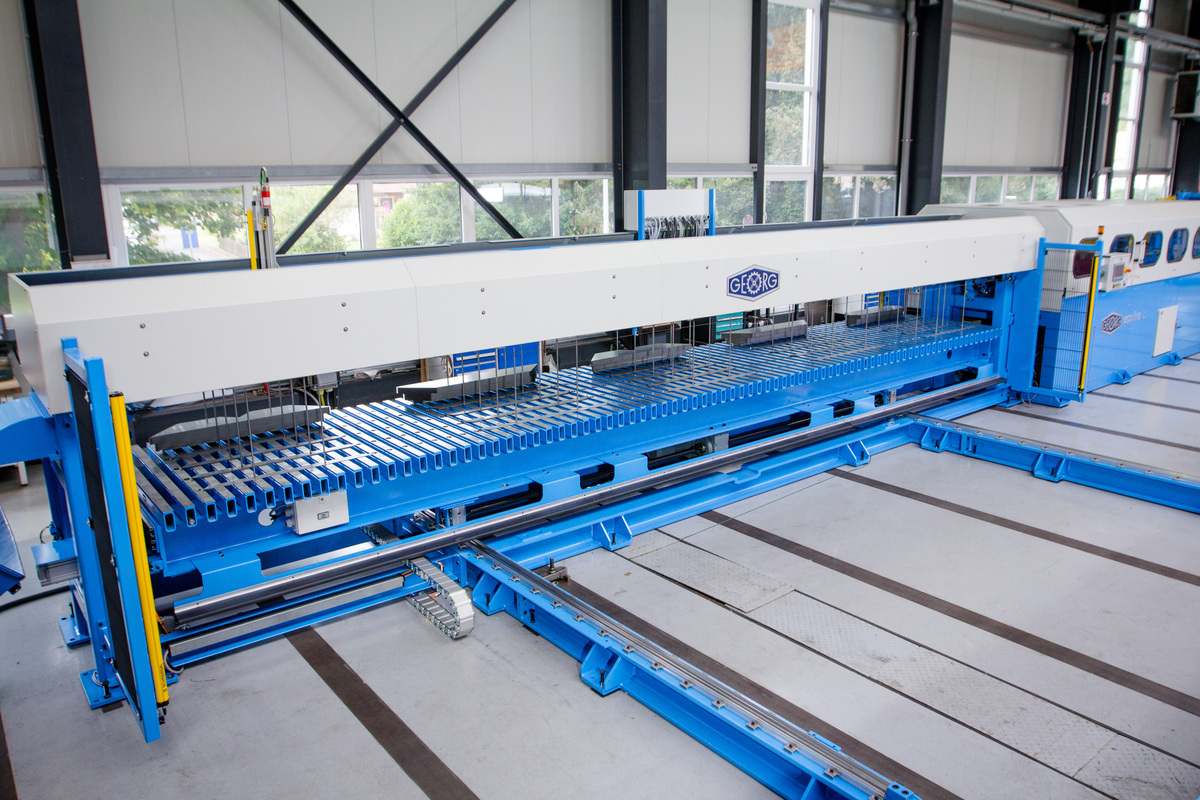 The first one is a machine type GEORG precisioncut TBA400 ecoline L with a full sequence in-line stacker for up to 1200 mm lamination length. The machine is now starting operation in the plant in Lodz, Poland.

Successful commission of TBA400 at Lemi

Together with one slitting line which was put into operation a few weeks ago, the new TBA400 expands Lemi's machine park and supports their growth strategy.

The benefits of pin stacker technology for the distribution transformer production can also be gained from a Transformer Magazine article 'Demand driven core production' we published recently.

Finally, a special congratulations to our technicians and also to our customer’s employees for carrying out the commissioning in record time. 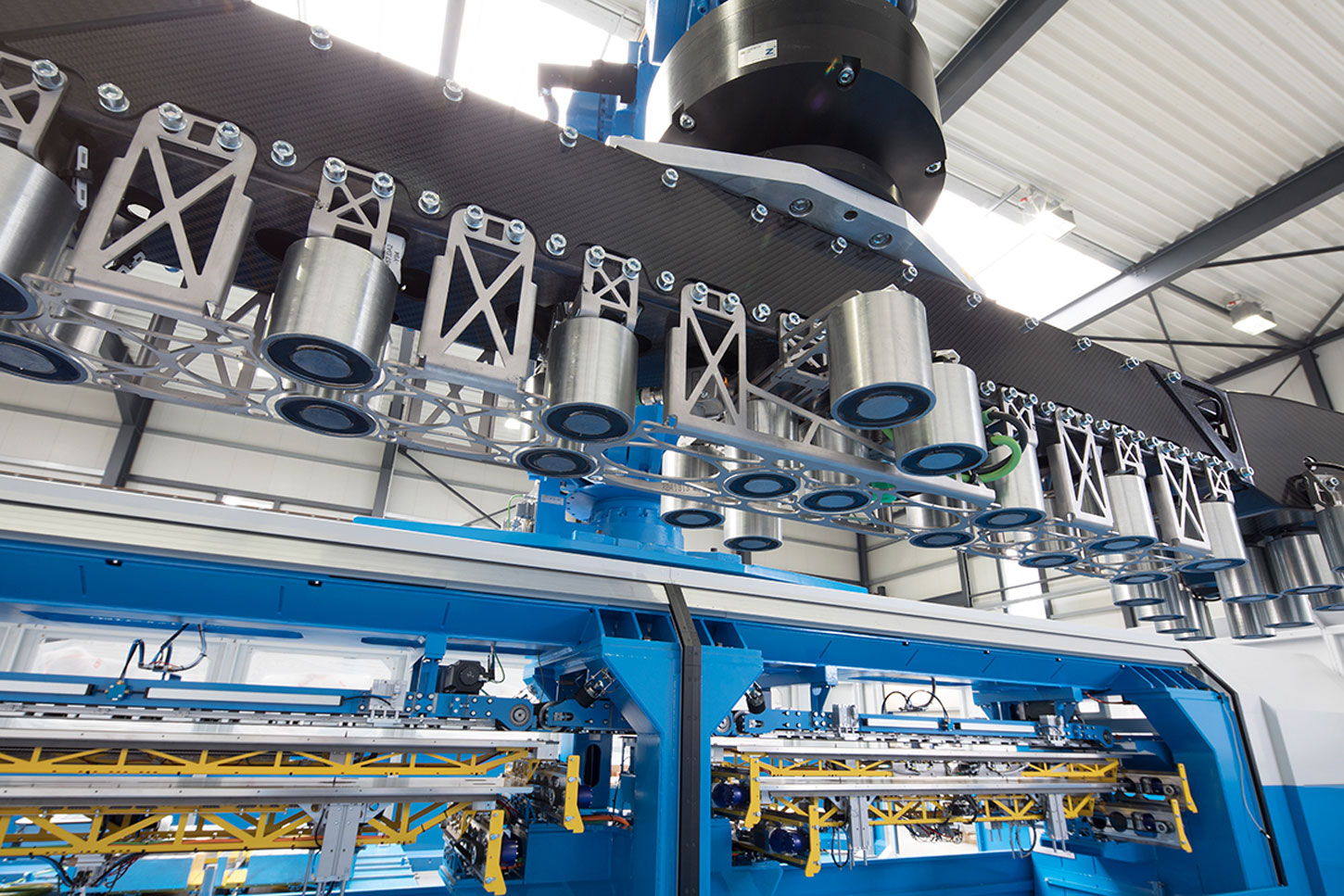 Hitachi Energy now takes advantage of the largest type of the GEORG robotlines. The line cuts and stacks laminations with up to 2000 mm centre length automatically to transformer cores. 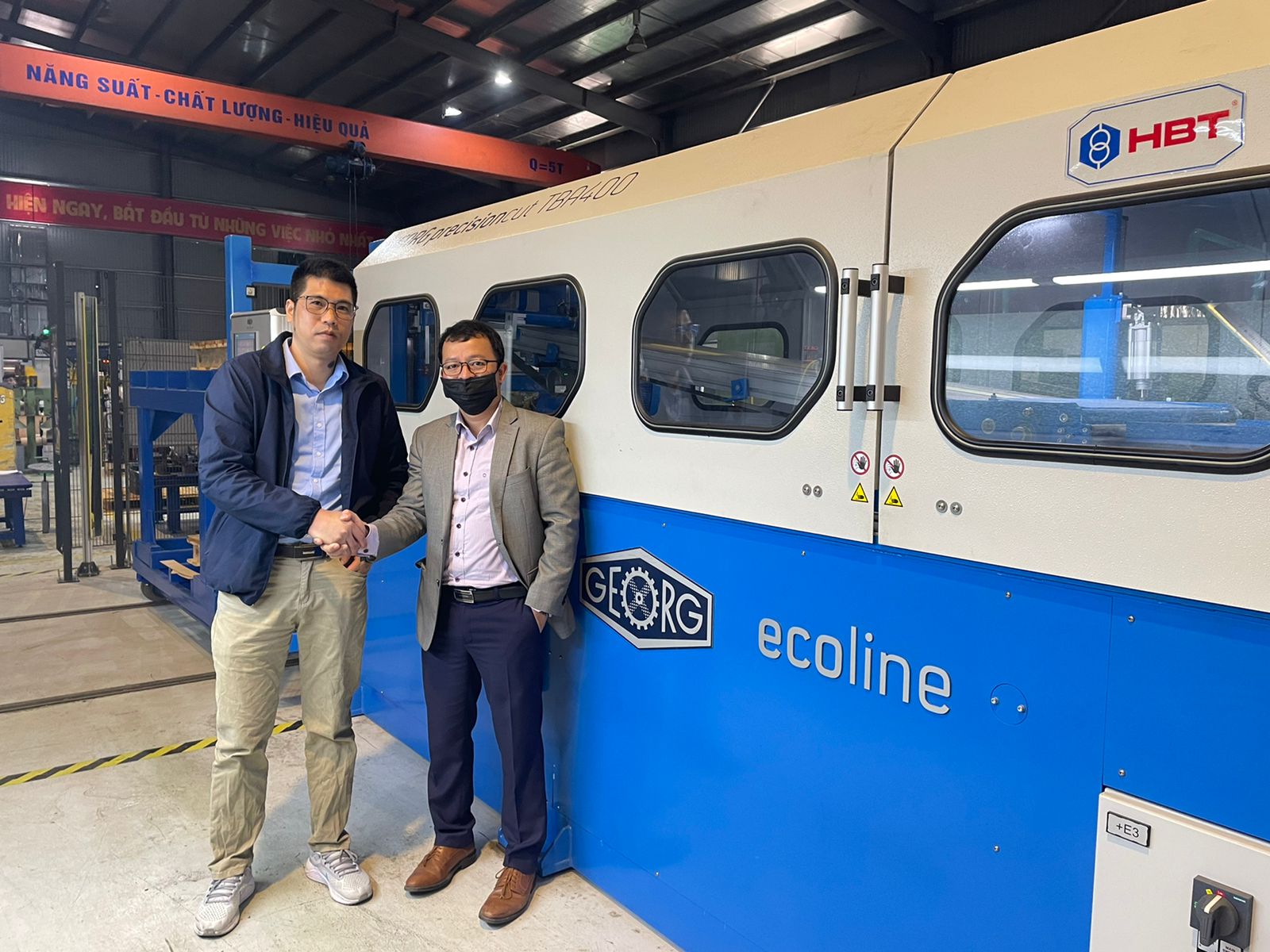 Travel restrictions during the pandemic made it often impossible to visit our customers on site. This also applied to the installation and commissioning of our machines. However, we successfully supported our customers remotely, through our online service. 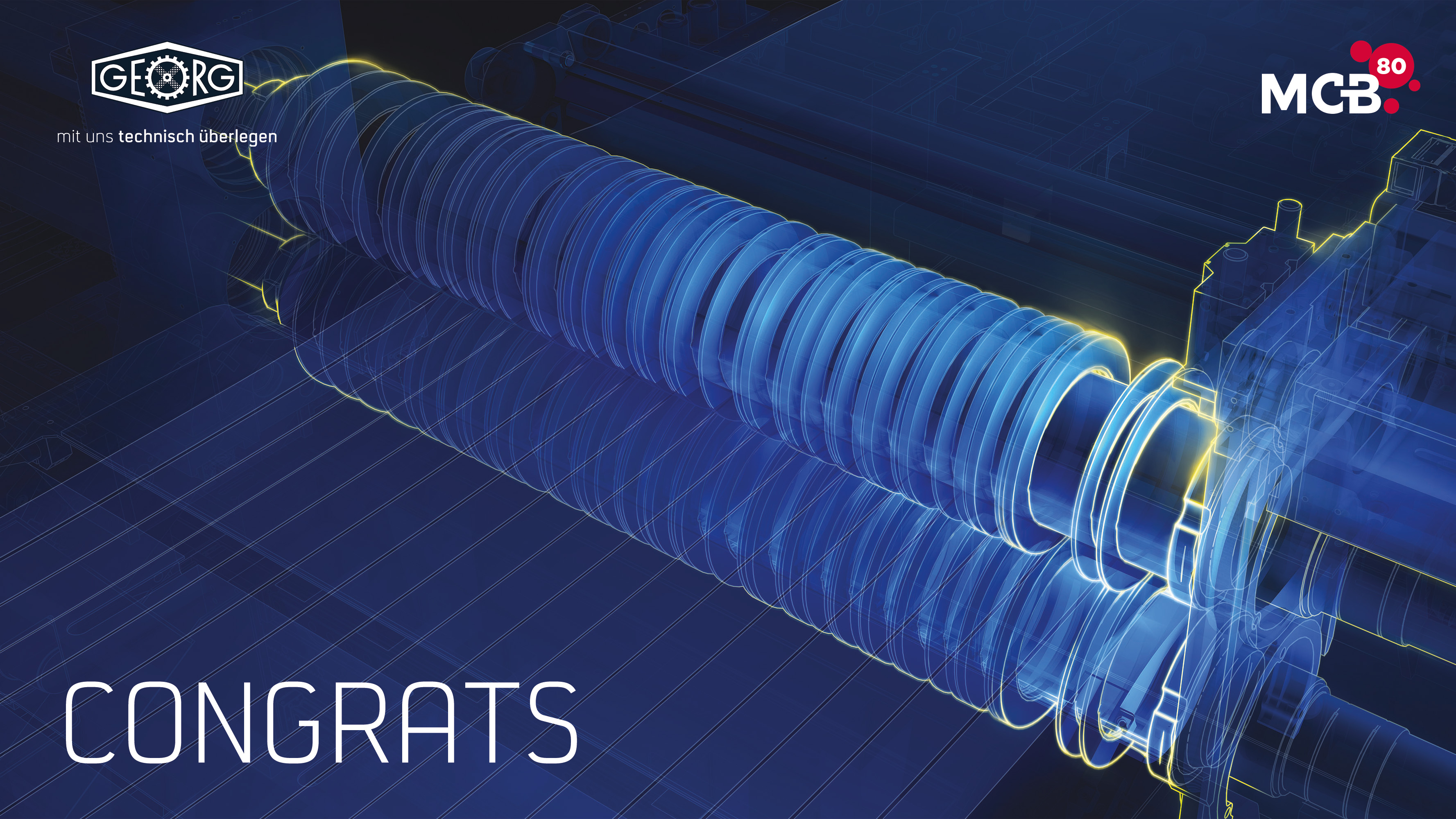 The GEORG team congratulates MCB to the companies 80th anniversary!

With great esteem we look upon the successfuf development for so many years. For sure this is not self-perpetuating but it is based on people who proceed with courage, persistance, power to innovate and enthusiasm.

We are grateful that we could contribute a little bit to such success with our products and services. Also in the future we will stand by side MCB as their reliable partner.