On 08th January 2013 inauguration of the Multi spindle Drilling Machine delivered by Heinrich GEORG to AREVA NP’s St. Marcel (France) works took place. A delegation of GEORG machine tools division also attended the ceremony. Mr. Samuel Martineau, project manager at AREVA, reviewed the history of the project: Whereas at the beginning there was the idea of simply revamping the existing machine on which AREVA was already facing difficulties with drilling of tube plates, it relatively quick became clear that the investment in new equipment was necessary.

The order on the delivery of a new multi spindle drilling machine was awarded to GEORG in December 2010. In regular meetings of the project teams the design of the machine regarding the requirements of AREVA’s operational process as well as the project progress were discussed. The multi spindle drilling machine was designed for drilling of tube plates for steam generators of nuclear power stations type EPR for which it became equipped with five individually adjustable drilling carriages as well as a tool changing system, a workpiece clamping system and a process monitoring system as further options.

The delivery of the machine to St. Marcel took place in August last year. After assembly, commissioning and test run at AREVA works the final acceptance certificate was issued during the visit of the GEORG delegation.

Mr. Hervé Hottelart, plant director at St. Marcel, emphasized the good quality of the GEORG machine. Whereas at the beginning of the project the drilling had been the bottle neck of manufacturing, he explained, this changed significantly due to the new machine tool. Not only the process time could be reduced, but also the accuracies and tolerances achieved at the plates have by far exceeded all expectatio 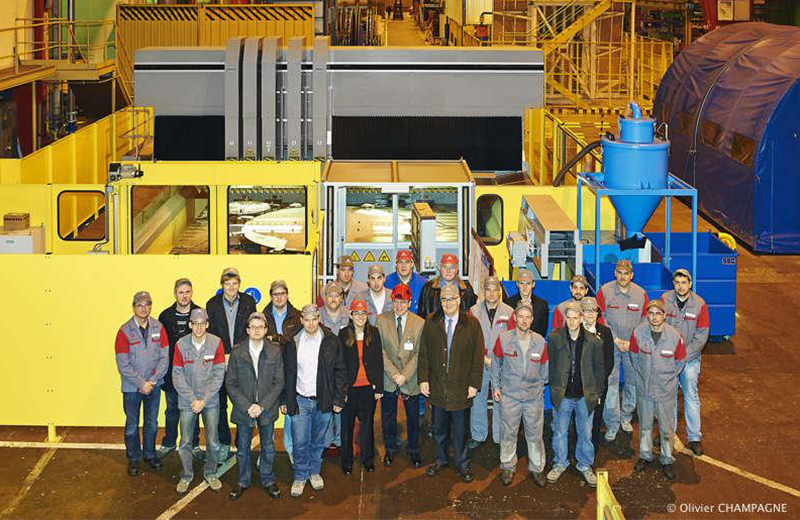